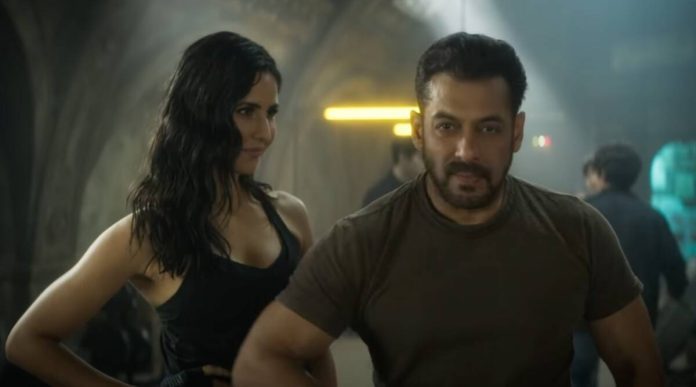 The wait is over! Salman Khan and Katrina Kaif starrer Tiger 3 will release on April 21, 2023. YRF (Yash Raj Films) shared a video announcement of their release date. The video shows Katrina Kaif doing some impressive action moves with some stunt masters and the camera pans to a sleeping figure (no prizes for guessing who).

Katrina then walks up to the sleeping figure and asks if he is ready. The blanket is removed slowly by none other than Salman – a very ripped and muscular Salman, who quips that he is always ready and flips the scarf in his hand towards the screen

Bang comes the announcement – Tiger 3, coming to a cinema on April 21, 2023 in Hindi, Telugu and Tamil. Tiger 3 also includes Emraan Hashmi, although not a lot is known about the character he will be playing. Speculations state that he could be the lead villain in the movie. Watch the announcement here.

Only a day earlier, Shahrukh Khan had shared the announcement of his upcoming movie Pathan.  YRF is keeping the excitement levels high among fans by sharing the release date of Tiger 3 the very next day.

The year 2023 is going to be action packed with the two mega star Khan movies. Shahrukh Khan fans will get an early treat in January with Pathan and Salman fans will bring in their summer and naturally, the festival of Eid with their favorite Bhaijaan back in his much loved Tiger avatar.

Apart from Tiger, Salman Khan also has Kabhi Eid Kabhi Diwali and No Entry 2 and he will also be seen in a cameo in Aamir’s Lal Singh Chaddha. Katrina Kaif is shooting for Phone Bhoot and Merry Christmas.

U-17 Asian Cup 2023 Qualifiers: India take on Maldives in their tournament opener (preview)

Ready to play the villain again if I get a good...

Bhojpuri actress Pakkhi Hegde has no qualms about playing a negative...

Is Shehnaaz Gill a part of ‘Kabhi Eid Kabhi Diwali’?