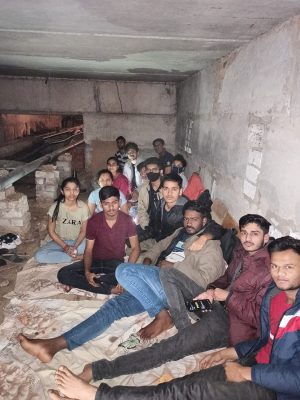 Even as they keep their fingers crossed awaiting an opportunity to leave the war-torn Ukraine, scores of stranded Indian students have taken shelter in different schools across the country to evade bombing.

Since Thursday morning, Russia has opened bombing along the Ukraine border and also hit many cities. Earlier on Friday, Indian authorities had told the Indian students living near the Hungarian and Romanian border to depart first in an organised manner in coordination with the teams.

A 20-year-old medical student Ankit Kumar stranded in Kiev told IANS that thousands of Indian students from different cities of Ukraine are running from pillar to post to get any help to leave the country.

“Finally today, many of them could come together in schools in different Ukraine cities with the help of Indian Embassy,” Kumar said.

Reaching the shelters was just a part of the ordeal. Even inside the shelters, the students can hear regular blasts.

“With colleges and universities expressing their helplessness and closing their doors for all, the students had feared that they may have faced food shortage. The other worry was staying warm, especially at night when the temperature dips at 1 degree Celsius too,” a second year MBBS student, Mamta Bansal told IANS.

US files charges in crackdown on Indian gang preying on elders

Jaishankar orders envoys to US, Canada to respond to death of...

India-born scientist elected to US National Academy of Sciences