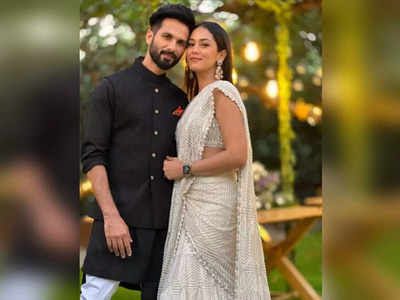 Sanah is Pankaj Kapur and Supriya Pathak’s daughter. She was last seen in Shahid Kapur, Alia Bhat and Pankaj Kapur starrer Shaandaar in 2015.

The wedding ceremony was attended by close friends and family of the bride and groom. The attendees also included Ratna Pathak Shah, Supriya Pathak’s sister, her husband Naseeruddin Shah and son Vivaan Shah.

Mira Kapoor posted dreamy pictures of the wedding celebrations on her Instagram. Shahid Kapoor also took to Instagram to congratulate his baby sister with an adorable pic.

Mira and Shahid attended the wedding along with their kids Misha and Zain.

While Mira looked stunning in a white saree, Shahid looked dashing in a kurta with a jacket of the same color. The contrasting outfits made for a stunning picture.

Mira’s Instagram posts were a delightful sneak peek into the beautiful celebration. Mira Kapur kept it real with a pic with a cute photo bomb of her baby’s hand, reminding us all that picture perfect looks a little different once you become a parent.

Shahid Kapoor was last seen in Kabir Singh. His next big release, Jersey, is all set to hit the big screen in April 2022. Jersey is a remake of a hit Telugu movie, of the same name. Shahid is also said to have signed up an Ali Abbas Zafar, yet to be titled action movie. He also has a busy year with his debut on the OTT platform with Raj and DK.

U-17 Asian Cup 2023 Qualifiers: India take on Maldives in their tournament opener (preview)

Desserts from ‘Purani Dilli’, ‘mehendi’ from Rajasthan for Richa-Ali’s wedding