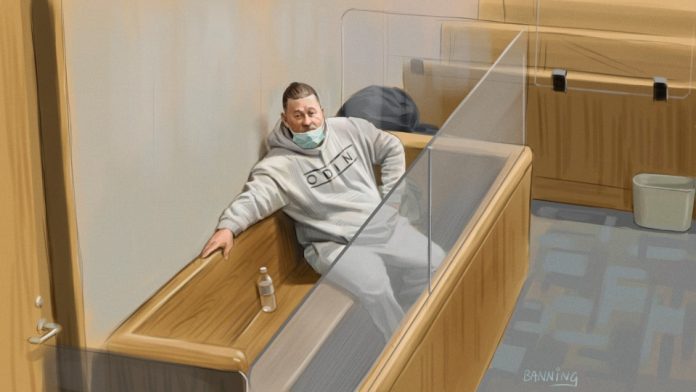 A prominent organizer of the three-week convoy protest outside Parliament Hill that snarled traffic, shuttered businesses and plagued residents with near-constant honking has been denied bail.

Justice of the Peace Andrew Seymour said he wasn’t satisfied that King, if released, wouldn’t commit offences similar to those he’s accused of.

In delivering his ruling, Seymour said the evidence submitted by the Crown “paints a portrait of an individual who has clear intention to continue his protest and is indifferent to the consequences.”

He also said that King need not be in Ottawa to commit further offences, pointing to the risk of King continuing to communicate with other protest leaders or his 354,000 Facebook followers.

Seymour said he also lacked confidence in King’s proposed surety, an Alberta woman who has known King for about four weeks and had come to Ottawa to be part of the convoy protest.

Seymour said there was some evidence that Kerry Komix may have held an organizer role in the convoy, noting her link to a convoy crypto token aimed at raising funds for those encamped in the capital’s core.

Komix was either “firmly entrenched among the leaders” of the convoy, or could be “easily manipulated” by them, Seymour said. He said the court would be taking an unacceptable risk by releasing King to Komix’s supervision.

Seymour said a reasonable person could lose confidence in the administration of justice should King be released.

“The offences were an attack on the rule of law that shook Ottawans’ and Canadians’ faith in institutions, such as government and the police, to protect them,” Seymour said. “The alleged offences are extraordinarily serious and unprecedented.”

Barricades marking a secure perimeter in downtown Ottawa were still up Friday, although the footprint was smaller than it was earlier in the week after the police dispersed demonstrators that had blocked city streets.

Police said the checkpoints will stay through the weekend with plans to intervene only in cases where people are taking part in illegal activity, such as blocking streets.

King sat in a courtroom a few blocks from those checkpoints as Seymour delivered the ruling Friday afternoon. He wore a camouflage jacket over a grey hoodie and matching sweat pants.

He shifted between hunching forward and leaning up against the wall behind him. At the end of the hearing, King flipped a bottle of water he had been sipping from during the afternoon session and snatched it out of the air.

At his bail hearing earlier this week, the Crown played video of King making derogatory statements about different races and appearing pleased that a court order had been required earlier this month to quell the honking of protest trucks.

The Crown asked earlier Friday to reopen the bail hearing so it could submit new evidence, but Seymour denied the request.

Seymour also ordered King not to speak with other organizers of the so-called Freedom Convoy, including Tamara Lich, Chris Barber, Daniel Bulford and Tyson George Billings.

Barber was granted bail last week after being charged for his role in the protest in downtown Ottawa. Lich was denied bailed earlier this week.

Billings had a bail hearing Friday, but the judge in the case said she was unlikely to provide a ruling by the end of day. A ruling may come Monday.

While Billings and King attended their hearings in person, the Crown attorneys and defence lawyers attended virtually.

Those tuning in virtually were warned against broadcasting proceedings after Crown attorneys in each case said some people had been streaming the hearings, including on Facebook, which is illegal.

Gas prices could break another record this Sunday

Canada, India to have bilateral centre for science and technology