March 4 is World Obesity Day – Why do we need it? 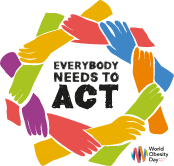 What are we celebrating?

The World Obesity Federation is a non-profit organization that works closely with Lancet Commission on Obesity and the WHO to organize this day on a global scale.

Is there a theme and significance?

Every year they choose a theme and the focus is on the theme. In 2016, the focus was on childhood obesity. In 2017, the theme was ‘Treat obesity now and avoid the consequences later’.

Why do we need an Obesity day?

The idea behind setting aside a date for Obesity  was not only to generate awareness about the health implications of poverty but also to help decide how to tackle the problem of obesity at all levels – local to global.

According to latest statistics, at least 800 million people worldwide are obese. Obesity causes a number of health problems like hypertension, diabetes, cardiovascular problems and it also affects vital organs such as the liver and kidney. According to WHO, the rate of obesity has tripled since 1975, particularly among child and young adolescents.

The objective of World Obesity Day is to create an impact and motivate the masses to move to a healthier lifestyle and timely exercise so that they don’t have to deal with the adverse health implications of being overweight.

Blood clot risk remains for year after Covid in those who...