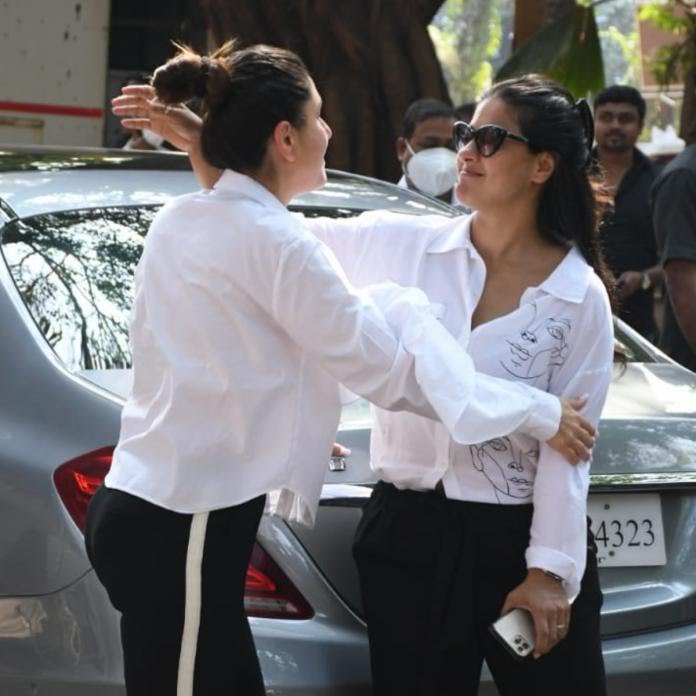 A video of Kareena Kapoor Khan and Kajol casually catching up with each other outside Mehboob Studios has set social media abuzz. Several fans are labeling it a Kabhie Khushi Kabhie Gham reunion.

Much like acquaintances catching up after a long time, the two ladies were seen talking about their families and discussing the super strong immunity of their respective husbands who have escaped the Covid infection so far. Kajol asked after Kareena’s little one Jeh who recently celebrated his first birthday. Kareena’s older son Taimur is now 5 years old. Unlike Taimur, who was the paparazzi favorite from the moment he was born, Kareena and Saif are ensuring Jeh is not in the limelight as much. They do share posts of the children and family on their social media handles from time to time.

Kareena informed Kajol that her sister, Actress Karisma Kapoor, recently contracted Covid. While the two leading ladies of Bollywood had a casual catch up social media exploded with tweets and posts full of nostalgia for Kabhie Khushi Kabhie Gham. Kajol and Kareena were last seen together in the movie We are Family, which was a remake of Hollywood’s Step-mom starring Susan Sarandon and Julia Roberts.

However, for fans of the two actors the association starts and ends with Anjali and Poo. On the workfront, Kareena’s Laal Singh Chaddha will hit the theatres on April 14, 2022 while Kajol was last seen on the OTT platform with a female centric film Tribhanga. Kajol will also have a small cameo in the Kareena and Aamir Khan starrer Lal Singh Chadha.

My process changes with every project: Actor Rajit Kapur

Chris Brown in awe of Indian family dancing to his number...