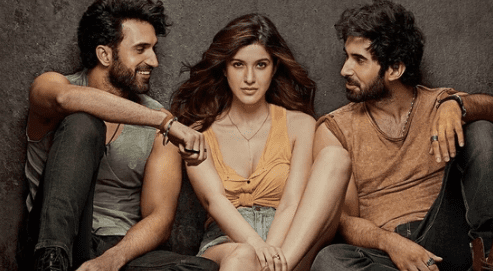 According to the video, today at 10 AM IST, he would unveil Dharma productions latest venture.

The poster is out now. The movie is titled Bedhadak and it features, Shanaya Kapoor, Lakshya and Gurfateh Singh Pirzada in leading roles.

This movie marks the debut for Shanaya Kapoor. Lakshya will be debuting with Dostana 2, while it is an official induction into the Dharma banner for Gurfateh Singh Pirzada who gained acclaim from his Netflix film Guilty where he starred alongside Kiara Advani.

Apart from the poster of the film, Karan Johar also shared individual posters of the leading actors on his Instagram page.

Lakshya was also cast in Dharma’s Dostana 2 opposite Janhvi Kapoor. Sharing a close up still of the actor in the poster, Karan tweeted, “”Looks that will melt your heart just as easily as his smile will. Presenting @itslakshya as Karan in #Bedhadak. Directed by the maestro of emotions, Shashank Khaitan!”

For Shanaya Kapoor, Karan shared another still from Bedhadak and tweeted, “Introducing the gorgeous @shanayakapoor02 as Nimrit in #Bedhadak. An enchanting force to look out for, I can’t wait to see the energy she brings onto the screen! “

Last but not the least, for Dharma’s latest entrant, but not debutante, Gurfateh Singh Pirzada, Karan wrote, “”His brooding good looks will have you smitten in no time! Watch Angad’s character come alive in #Bedhadak with @gurfatehpirzada bringing his effortless suave onto the big screen!”

Gurfateh Singh has been in the industry for the last four years but he was noticed particularly after his film Guilty. Dharma productions signed up with him right after.

Lakshya Lalwani will soon be seen in Dostana 2. For those who aren’t aware, Lakshya is a well-known face in Indian television starring in shows like Adhuri Kahaani  Hamaari, Pardes Mein Hai Mera Dil and Pyar Tune Kya Kiya.

Shanaya Kapoor has previously assisted in her cousin Jahnvi Kapoor’s film, Gunjan Saxena. She is the daughter of actor Sanjay Kapoor and Maheep Kapoor. This is the first look poster of the movie. Trailers and release date are yet to be announced.

‘Shabaash Mithu’ teaser sets the tone for a thrilling biopic