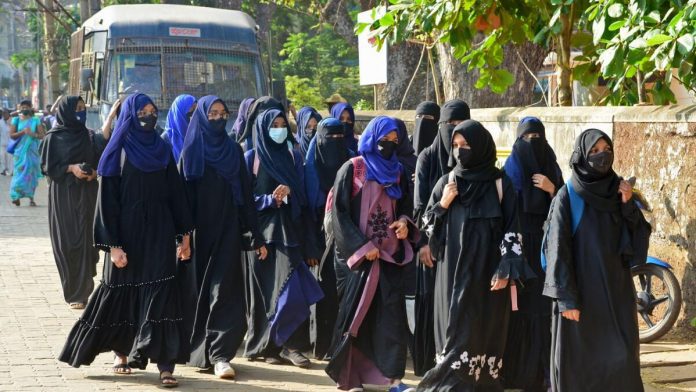 Counsel appearing for students seeking to attend schools with hijab, on Thursday urged the Karnataka High Court that these students be allowed to wear hijab and attend classes on Fridays at least.

Senior advocate Vinod Kulakarni, appearing for the students, submitted that the hijab issue has created mass hysteria and mental disturbances throughout the country, and that sending poor Muslim girls out of class is against the preamble of the Constitution.

At least on Fridays, and ensuing holy month of Ramzan, beginning in Marc), let the students be allowed to come wearing hijab, he said, quoting a Lata Mangeshkar song, “.. Kuch paake khona hai, kuch khoke paana hai’ (to get something you lose, you lose something to get something) and sought court directions in this regard.

“I beg with my folded hands to allow hijab on Fridays and it will avoid unnecessary controversy,” he said, adding that the Quran can’t be ignored and hijab is not against public order. Outside authorities have no standing and have no authority to pass orders in religious matters and beliefs, he said.

Advocate General Prabhuling Navadagi, appearing for the state government, opposed the demand, saying that if the request is considered, it is as good as considering the petitioner’s application.

Senior advocates Devdatt Kamat, Ravivarma Kumar and Yusuf Muchchala, appearing for the petitioners, have completed their arguments on Wednesday.

The three judge bench, which heard the matter for the fifth consecutive day, subsequently adjourned the matter to Friday, when Navadagi will present his arguments.

Counsel for petitioner have so far vehemently argued for lifting of interim order prohibiting wearing of hijab and saffron shawls to classes, contending that the government is misusing the interim order issued by the court to target Muslim students.

However, the bench headed by Chief Justice Ritu Raj Awasthi and comprising Justice Krishna S. Dixit and Justice Khaji Jaibunnesa Mohiyuddin has not acceded to this.

Meanwhile, the six girls from Udupi who started the hijab protest have chosen to remain absent from the college until the final order.

Meanwhile, police had a tough time as about 340 students resorted to block the road holding placards in support of wearing hijab in Hassan. A police officer warned them of action and dispersed them.

A tense situation is prevailing at Saraladevi College in Bellary as hijab wearing students joined by parents refusing to go back even after several requests from college and police authorities.

Teacher by profession, artist by passion

‘Why do you fear probe?’ Kerala HC asks president of advocate...