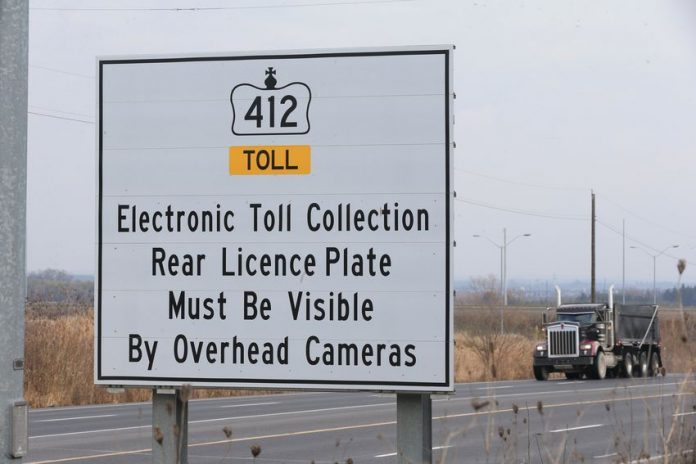 As of April 5 Highways 412 and 418 in the Durham region will become toll-free, the province announced today.

“We have heard the people of Durham loud and clear and we agree that the tolls imposed on Highways 412 and 418 by the previous government are wrong and unfair,” said Premier Doug Ford. “That’s why we are removing the tolls on these Highways so that people and businesses have more travel options and hard-earned money in their pockets.”

The premier called it a great day for Durham region.

The move comes on the heels of a number of Durham Region mayors writing a letter to the province in December, urging it to scrap the tolls. Two Durham MPPs who were present for the announcement commended the move.

“When the previous government imposed these unjust road tolls, they placed a financial burden on drivers and families in Durham Region,” said Peter Bethlenfalvy, MPP for Pickering-Uxbridge.

“I have long advocated for the removal of tolls from Highway 412 and 418, and today we are taking action to resolve this unfair decision made by the previous government,” added Lorne Coe, MPP for Whitby.

Highways 412 and 418 were built under the previous Liberal government as part of the Highway 407 east extension.

“The previous government unfairly targeted drivers and businesses in Durham Region by imposing tolls on Highway 412 and 418, leaving them underutilized while local streets became increasingly gridlocked,” said Caroline Mulroney, Minister of Transportation. “As we move forward with new highways, our government has been clear that we will not repeat the mistakes of the past and impose these types of cost burdens on Ontarians.”

The Ford government had previously frozen the tolls on both highways through May 2023. It had also indicated that it would be reviewing tolling options on the roadways.