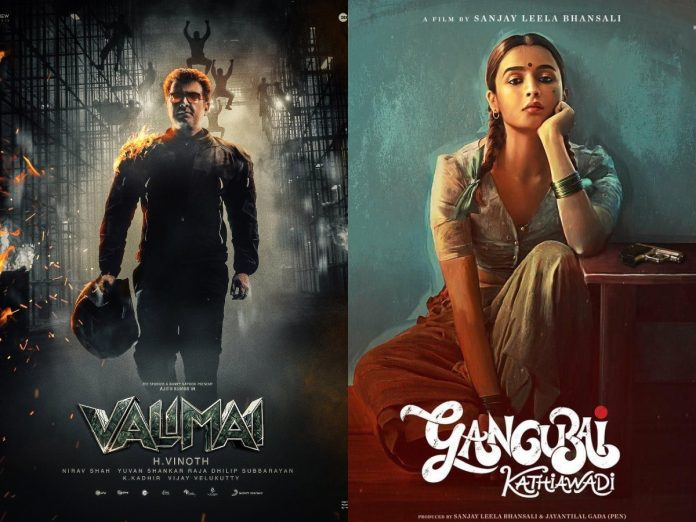 Sanjay Leela Bhansali’s Gangubai Kathiawadi got a strong opening boost in theatres. It has been steadily making business and according to box office revenues and six days since release it made Rs. 63.53 crores business.

Meanwhile, in the south, actor Ajith and Huma Qureshi’s Valimai can be called the first big hit of 2022. It crossed the 100 crore mark by the end of the first week.

Even though by numbers Ajith’s movie is a hit, the success is only limited to the southern region. The movie failed to impress audiences in the North and barely managed to make revenue of Rs. 2 crore.

The fact that there was an alternative in Gangubai Kathiawadi for audiences could be one factor. But mostly it could be that Valimai did not offer anything new for the Hindi audiences.

Alia is being applauded for her fantastic performance as Gangubai and even though the revenues don’t reflect it, the movie can be considered a hit as it is very popular and is being talked about everywhere.

Valimai, even with the numbers, hasn’t found pan India appeal, despite having Huma Qureshi in the lead (who is well known in Bollywood). Of course it is a popular movie down South and will be hauled as the first hit of 2022. However, the fact that the lead actor Ajith doesn’t participate in too many promotional activities or make various appearances might have hindered the success of the movie in the Hindi belt.

Movies like Bahubali and RRR were also south Indian films, but they captivated audiences across India and the world over due largely to the fact that the makers of the movie and the lead actors just went out there all over the country promoting and publicizing the movie.

Maybe Ajith can rethink his reserved approach (which is his biggest appeal among Tamil cinema audiences) and be more visible so his hit movies become mega hits across the nation.

V. Gowthaman to direct ‘Maveera’, a film on valour, values and...

‘Jayeshbhai Jordaar’ is a short Bollywood movie – only 2 hours,...

Kishore Bhanushali lost many acting projects because of his resemblance to...