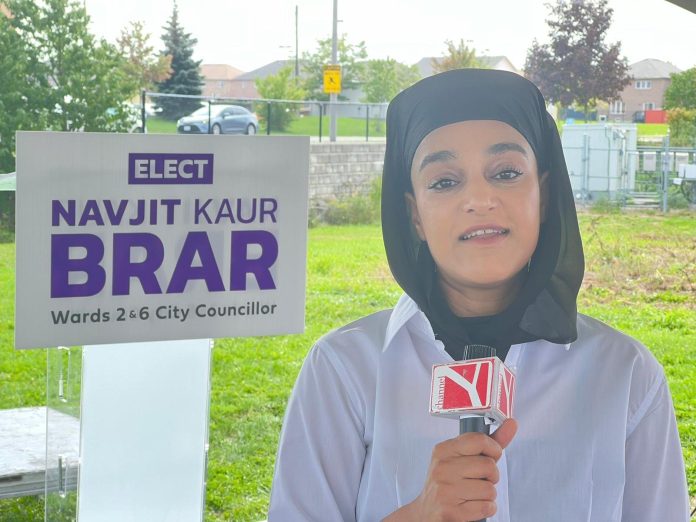 Brar, a respiratory therapist and a mother of three, won the race for City Councillor in Wards 2 and 6, beating Jermaine Chambers, a former Conservative MP candidate for Brampton West.

Brar had 28.85 per cent of the votes cast on Monday with Chambers as nearest contender with 22.59 per cent, and Carmen Wilson coming in third at 15.41 per cent, the Brampton Guardian reported.

"I am so proud of @Navjitkaurbrar. She was a selfless and dedicated front line healthcare worker during the pandemic. She has stepped up for public service and I am confident she will be a phenomenal addition to Brampton City Council," tweeted Brampton Mayor Patrick Brown, who won a second term in recent election.

As part of her campaign she knocked over 40,000 doors and spoked to over 22,500 residents in the last two months.

"Over the past 3 years, I've spoken to countless Bramptonians and the sentiment I hear is that they are all hurting, they feel unheard, they feel left behind. With the rising cost of living It's getting harder to raise and provide for your family in Brampton… As your city councillor I will fight for better services for all Bramptonians and ensure that your voices are heard," Brar had said in her campaign pitch.

Another Sikh candidate, Gurpartap Singh Toor, knocked off his opponent Gurpreet Dhillon in Wards 9 and 10 by a scant 227 votes.

As many as 40 Punjabis were in the fray for Brampton civic elections, according to local media reports.

Out of 354,884 eligible voters in Brampton, only 87,155 of them turned up to cast ballots — an abysmal voter turnout of approximately 24.56 per cent, according to unofficial results, The Pointer reported.

The Indo-Canadian community, along with the councillor candidates, had raised concerns over the election date overlapping with Diwali — one of the most-awaited festivals celebrated by the large swathe of Indian diaspora present in the North American country.

"It is very problematic that the elections are taking place on the Diwali day, especially the municipal election that has always seen a low voter turnout," Gurpratap Singh Toor, who has won Wards 9 and 10, had told Omni Punjabi.

Elections for municipal government are held every four years on the fourth Monday of October, which fell on October 24 this time.

These polls usually elect a mayor and city council and sometimes also a school board.

Around 40 per cent of Brampton's population is South Asian, and the municipal election also fell on the religious festival of Diwali, celebrated by Hindus, Sikhs and Jains.

Mississauga is hiring election workers for the Oct. 24 municipal polls

Why kids in Canada, the US, Europe are suffering from hepatitis