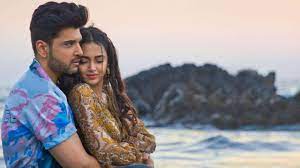 Big Boss 15 couple Tejasawi Prakash and Karan Kundrra’s latest music video is out. It is overloaded with the sizzling chemistry of the Big Boss house lovebirds.

Check out the video here

It is Tejasswi and Karan’s mind blowing chemistry in the music video that has caused this video to go viral within a few hours and already the views are over 700,000. While the song is a heartbreaking melody sung beautifully by Yasser Desai, and the video is about heartbreak, it is Tejasswi’s and Karan’s intimacy and chemistry in the video that’s gotten everyone’s attention.

Perhaps its because they started dating on national television, as the pair seem inseparable even outside of the show and have been photographed together frequently. They were very vocal about their valentine’s day plans and the couple cannot stop gushing about each other on social media.

Tejasswi was the winner of Big Boss 15 and right after she immediately started shooting for the television series Nagin 6. Karan Kundrra has been roped in to host Lock Up, Kangana Ranaut’s reality show.

Pairing up and romantic flings are a common feature of every season of Big Boss and Tejasswi and Karan are the latest to join the list of couples. So far, none of the people who coupled up in the house have stayed strong for long in their relationship outside of the show. Only time will tell, if this pair can beat the odds.

‘Liz Truss’s government is in chaos’

Arjun Bijlani: I have enjoyed every moment hosting ‘India’s Got Talent’